On June 22, 2000, Clinton County celebrated the dedication of their new courthouse. The 117,000-square-foot structure is definitely something for the Mid-Michigan region and county seat of St. Johns to feel proud about. Instead of just demolishing an old landmark and building a modern facility in its place, Clinton County has honored the past by incorporating it into their future with this new facility.

Original Building
The original building was started in 1869, and completed in 1872. It faced several delays. The first was because the county board rejected all bids for the balance of the work even though construction had already begun. They believed that the low bidder's estimate was too low and to protect himself from losing money the quality of his work would suffer. Work was delayed again in 1871 when the courthouse dome was struck by lightning! With several additions, the old courthouse served Clinton County's needs for the next 100 years. 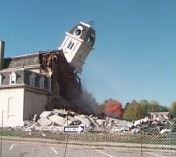 New Building
Toward the end of the 20th Century, faced again with needs for additional space, Clinton County's Board of Commissioners recognized the lack of modern amenities and lack of accessibility in the aging facility were obstacles too large to overlook in any modernization project. A building committee was formed to research construction and renovation options. After thoroughly analyzing the cost implications of seven different scenarios and polling the public for majority opinion, the Board of Commissioners decided that razing the old building and constructing a new complex in its place was the County's best choice.

In October of 1998, the 126 year-old structure was scheduled for demolition. In one day the entire front face of the courthouse was removed. The next day, the clock tower was to be toppled. The clock tower resisted demolition however, and crews had to bring in special equipment to remove it. The rest of the building was demolished without incidence. In December, local government officials gathered for a groundbreaking ceremony and work was underway. 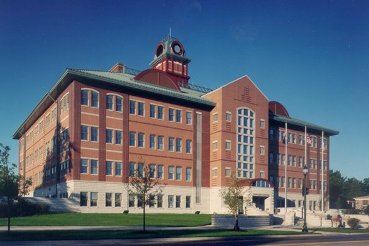 One of the grand moments during construction was the placing of the new cupola. Hundreds of area residents and school children watched in the rain as the new cupola, so reminiscent of the original clock tower, was lifted into place. The 17,000-pound cupola had been completely fabricated in Campbellsville, Kentucky, then disassembled for shipment to St. Johns. The cupola was reassembled on the ground near the new courthouse and then lifted into place with a 164- ton Liebherr CTM 1100 hydraulic all-terrain crane with 148-foot of boom and 139 ft. of jib. The new cupola does contain items salvaged from the original courthouse and clock tower. The original clockworks and original bell, now both refurbished, are installed in the new cupola. The spiral access stairs salvaged from the original building now provide access into the cupola from the mezzanine.

The 5-floor structure includes a garden level for MSU Extension, MIS, maintenance and storage. The east side of the first floor houses the Equalization, Central Dispatch/911, Community Development and Building and Zoning, and the west side houses the City of St. John's offices. On the second floor county offices include the Drain Commissioner, Treasurer, Register of Deeds, Clerk, Administration and Accounting with the Board of Commissioners Room occupying a large section on the west side. A security screening area in the main hallway on the second floor monitors traffic on the secured elevators to the top two floors where the courtrooms are located. The court facilities located on the third floor are the 65th District Court, District and Circuit Court Probation and the Prosecutor's office. There is space on the third floor for the addition of a second District Courtroom at a future date. The fourth floor contains Circuit Court, Probate Court, Juvenile Court and offices for the Friend of the Court.